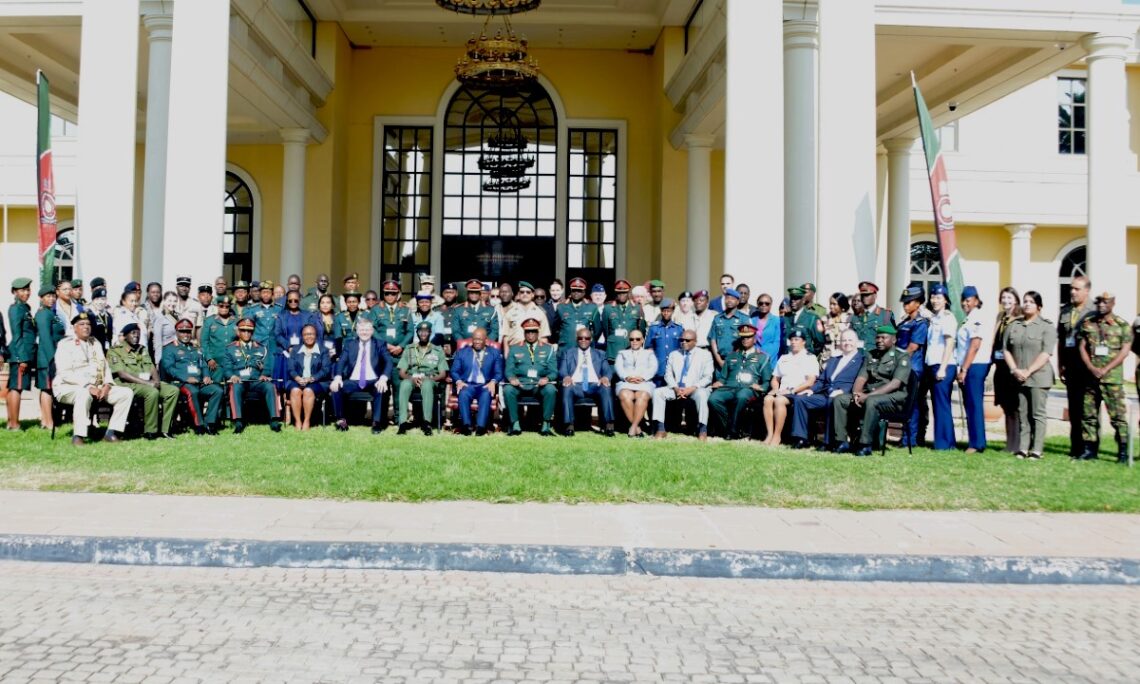 Gaborone, BOTSWANA – United States Africa Command (USAFRICOM), the Botswana Defence Force (BDF), and the North Carolina National Guard (NCNG) hosted the sixth African Military Law Forum at the Grand Palm Convention Center in Gaborone, Botswana, from August 8 – 10, 2022. This signature legal engagement brought over 80 African military legal advisors, magistrates, and professionals from 40 countries together from across the continent to share best professional practices. Attendees included some of the highest ranking military and civilian Ministry of Defense attorneys in their respective countries.

This year’s theme was “The Legal Dynamics of Preparing the Force for Deployment and Military Operations.” Lieutenant General Placid Diratsagae Segokgo, Commander of the BDF, gave welcoming remarks. He noted the importance of having legal advisors on a commander’s staff. Following the rule of law was central to successfully executing a military campaign, according to General Segokgo. He also noted that on Saturday, August 6, USAFRICOM, in concert with the BDF, launched the inaugural Women’s African Military Professional Legal Network (WAMPLN) meeting to promote equity in the military. The Honorable Thomas Kagiso Mmusi, Minister of Defence and Security of Botswana, delivered the keynote address and stated, “Armies are powerful instruments of government, bringing peace and security. They must be resourced and supported with due regard.” The Minister, too, lauded “a smooth integration of women in the military. In 2007, Botswana took a deliberate decision to commission women in the BDF.” He acknowledged that the BDF faced many challenges but he was committed to ensuring military lawyers and professionals would have a seat at the table when decisions were made in defense of the country.

Acting Deputy Chief of Mission to the US Embassy in Botswana, Ms. Kundai Mashingaidze, gave her welcome remarks and focused on the unique contributions of women to peace and security. “When women are fully involved and consulted in efforts to build peace and security, there is a positive correlation with reducing armed conflict, sustaining peace agreements, developing democratic systems of governance, and ensuring long-term security and recovery of communities and nations.” Ms. Mashingaidze stated that “incorporating a [Women, Peace, and Security] WPS strategy requires a whole of government approach. It cannot be the singular domain of the military, or the diplomats, or the politicians. We all need to work together to achieve this.” Mr. Mark “Max” Maxwell, Deputy Legal Counsel, USAFRICOM, placed the agenda into the theme of networking, enabling, and security. Mr. Maxwell stated, “This conference discusses the profession of the law and the profession of military arms. How do lawyers support commanders?” Mr. Maxwell emphasized that military lawyers were part of two professions: the profession of arms and the profession of law. The two are complementary to “ensure that commanders make the right decisions . . . as ultimately a citizen should run to its soldiers, not run from them.”

The current AMLF President, MG Yusuf Shalangwa, Nigerian Army, briefed the status of the AMLF and reminded those present of the mission of AMLF: “to provide African military legal professionals with a platform to strengthen cooperation and facilitate collaboration amongst themselves. It promotes military operational adherence to the law and respect for human rights and international humanitarian law. We do this by exchanging best practices, collaborating on legal projects, and networking within the professional community.” After the opening ceremonies, the largest of the five previous AMLFs, 85 African delegates started their substantive program. The topics ranged from out briefs on the inaugural WAMPLN event to the use of the military in domestic operations to contracting during a pandemic. The presentations and the panels were extraordinarily diverse, calling upon the legal expertise found across the continent: Uganda, Liberia, Ghana, Burundi, Cameroon, Burkina Faso, and of course, Botswana. One panel discussion included Ms. Eyitayo “Tee” St. Matthew-Daniel, an attorney with the United States Department of Justice. She, along with a panel of contract and procurement experts, discussed the contract and procurement challenges when forces are deployed. Ms. Matthew-Daniel could not attend in person, so Mr. James Dapper, the lead panelist, used Zoom to allow her to participate from New York City.

The final substantive presentation was a robust dialogue between legal advisors and commanders. Major General Mpho Churchill Mophuting, Deputy Commander, BDF, succinctly stated that “the legal advisor can ensure we make rational decisions by working closely with their commander. Commanders are normally higher in rank than the legal advisor; commanders need to ignore the rank of the legal advisor.” Brigadier General Cristina Moore, Assistant Adjutant General for Logistics, NCNG, echoed similar themes, stating that “Legal advice guides the commander’s decision in both peace and combat. The relationship does not work if you start in combat. Meeting with the legal advisor is a priority and must be recurring to build trust.” In addition, Colonel (retired) Rick Fay, General Counsel, NCNG, and Colonel Ontisitse Zak Ntloore, Director of Legal Services, BDF, gave their best practices on how to advise commanders and enable the commander to achieve mission accomplishment within the rule of law. As observed by Colonel Fay, “The law enables mission success.” The final AMLF afternoon was dedicated to electing a new AMLF Board and revising its governing document. On the heels of the WAMPLN, which brought a record number of women to AMLF, six of the nine elected positions on the Board will be held by women.

The closing ceremony on Wednesday afternoon was hosted by Advocate Abraham Keetshabe, the Attorney General of Botswana. His remarks focused on the role attorneys play in a civil society. He was very proud that Botswana hosted the AMLF, an event that brought the military and the law together. He emphasized that commanders who have the benefit of lawyers advising them will make better, more informed decisions. Advocate Keetshabe concluded the Forum elegantly by stating, “The law is our compass and that has never been truer than for our nation’s military.”