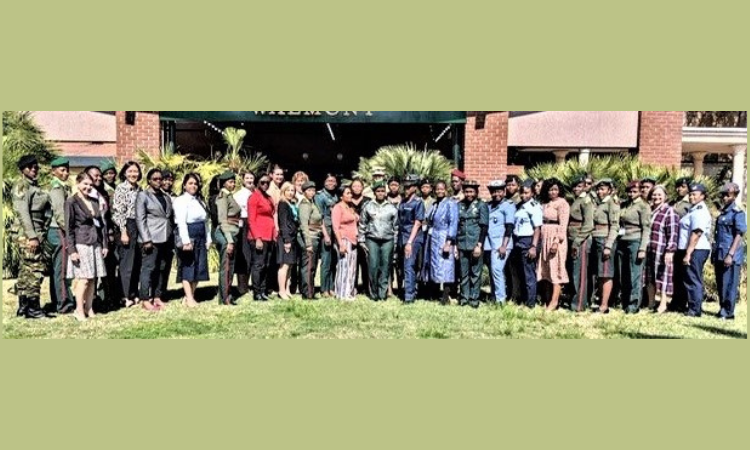 Gaborone, BOTSWANA – The United States Africa Command (USAFRICOM) Office of Legal Counsel co-hosted the inaugural Women’s African Military Professional Legal Network (WAMPLN), along with the Botswana Defence Force (BDF), at the Grand Palm Convention Center, in Gaborone, Botswana, on Saturday, August 6, 2022. This inaugural event was part of the larger sixth African Military Law Forum (AMLF) taking place later in the week from August 8 -10, co-sponsored with the North Carolina National Guard and the BDF. The WAMPLN event brought 60 female African military legal professionals from 16 African countries to discuss the importance of networking. Attendees represented a diverse audience, including the most experienced and senior level magistrates and legal advisors within their defense institutions, as well as a number of younger professionals. WAMPLN also served as a catalyst to consider attendees’ professional experience and how that might represent Women, Peace, and Security (WPS) related themes.

The event was led by USAFRICOM’s Associate Legal Counsel, Ms. Sandra Franzblau, and BDF Advisor, Major Matshediso Kau. Ms. Shannon Meehan served as the facilitator, using her experience as a trainer and consultant on gender considerations in conflict zones. Major Kau opened this inaugural event by stating that “it was momentous as for the first time, it brings together female legal advisors and magistrates, to learn from one another and network.” Ms. Franzblau introduced the agenda, and stated, “All of us within this room represent one of the four pillars of the Women, Peace, and Security (WPS) framework: the integration of women into the security forces. I recognize that there is a high likelihood that your professional experiences might cross into other areas of the WPS framework. What we do with this, what happens next for WAMPLN, will ultimately be decided by you. This event belongs to you.” Ms. Franzblau noted a theme that resonated with both the WAMPLN and the AMLF plenary session: “It is not up to a minority community to fix the issues of majority cultural bias and prejudice. While the experiences and perspectives of the minority should be guiding, the fix belongs to everyone.”

In attendance were the AMLF Vice President, Major Berthe Tambe, and the AMLF Advisory Council Member, Colonel Marguerite Meffand-Loaw, both Magistrates of the Cameroon Armed Forces. Colonel Meffand-Loaw deployed for two years as a magistrate with the United Nations Organization Stabilization Mission in the Democratic Republic of the Congo (MONUSCO). She affirmed that she saw the disparate impact gender plays in armed conflict. This view was seconded by attendee Gunnery Sergeant Mildred Bowman, United States Marine Corps. Gunnery Sergeant Bowman is currently deployed as a gender advisor and human rights violations analyst at the United Nations Multidimensional Integrated Stabilization Mission in the Central African Republic, known as MINUSCA.

Following the introductions of all 60 participants, Ms. Meehan led robust discussion groups to first introduce the WPS agenda. She underscored a series of ten United Nation Security Council Resolutions (UNSCR), starting in 2000 with UNSCR 1325, that link women’s experiences of conflict to the maintenance of peace and security. Together, they form an international legal and policy framework emphasizing the necessity for: women to fully and meaningfully participate at all levels of decision making, to include within the security sector; women to participate in preventing the emergence and spread of violent conflict; women and girls in conflict to be protected, to include the reporting and prosecution of sexual and gender based violence; and women to have equal access to humanitarian and development assistance in all relief and recovery efforts. Further, Ms. Meehan discussed that nations are to develop action plans, sometimes referred to as 1325 National Action Plans. As of today, approximately half of UN member states have National Action Plans.

Attendees ultimately determined that WAMPLN should continue as a committee within AMLF. This committee would allow participants to maintain contact with one another, ensure WAMPLN serves as a forum where some of the challenges of gender integration could be discussed, and allow the AMLF to more formally consider gender in all future events, thereby operationalizing gender considerations. At the end of WAMPLN’s event, the entire AMLF Board was briefed, and the Board strongly concurred with the results. There was an out brief to the AMLF plenary session on August 8, summarizing the decisions and recommendations that were made during the WAMPLN. Subsequently, elections were held for AMLF’s next leaders and several WAMPLN attendees ran for various positions. Following the elections, AMLF’s nine-member board went from two female representatives to six. Ms. Meehan concluded that “Throughout the group discussions and questioning, there was a keen interest and enthusiasm to understand the priorities of Women, Peace, and Security. They were ready to operationalize WPS not only within their day-to-day military legal duties, but also within all branches of the military.”