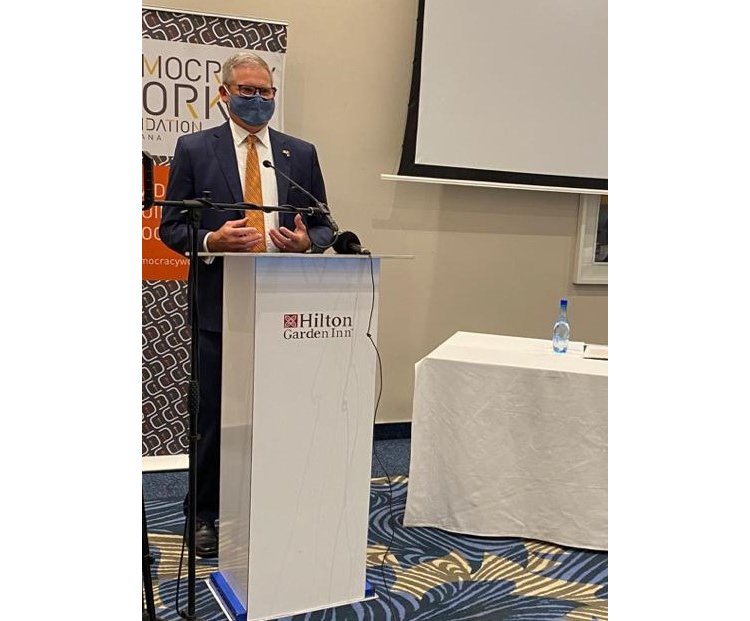 U.S. Ambassador Craig L. Cloud and Minister of Nationality, Immigration and Gender Affairs, Hon Anna Mokgethi, joined Democracy Works Foundation to launch a U.S.-funded program designed to increase the participation of women in Botswana’s political process “Go Ruta Mosadi ke go Ruta Sechaba”.  The $250,000 grant, funded through the U.S. Department of State’s African Regional Democracy Fund program for the Capacity Enhancement for the Political Advancement of Women (CEPAW) Project, will support trainings for women interested in politics.  As the implementing partner for this grant, Democracy Works has engaged all of Botswana’s major political parties on this issue and will launch training programs later in the year.

The CEPAW aims to promote and increase Batswana women’s participation and inclusion in politics, raise awareness of the importance of including women in politics, and foster community among women candidates and political figures.  It will bolster equal representation by advancing women’s issues and active participation across many areas of Botswana politics, including in political parties, civil society, academia, government, media, and the private sector.

Ambassador Cloud said he was impressed by the number of women he sees in Botswana leading major corporations, holding top positions in civil service, serving in the judiciary and security forces, and using their entrepreneurial skills to start small- and medium-sized businesses.  Cloud noted that Botswana lags far behind its counterparts in the SADC region in terms of including women in political and elected leadership roles in government.  The international community applauded Botswana for holding transparent and secure elections in October 2019.  However, Cloud noted that, “In many ways, they [Botswana] were models of democracy for the region.  But the outcome of the vote was not.  Women are a majority in Botswana, accounting for 52 percent of the population.  But as you all know, only three women were elected to Parliament last October out of 57 constituencies, and perhaps more troubling, only 12 women stood as candidates for the National Assembly.  Adding the four specially elected members, women now make up a mere nine percent of lawmakers.”

At the event Ntlogeleng Modise, CEPAW Project Manager outlined the program’s goals and plan of action for stakeholders. This platform will offer stakeholders an opportunity to advise on best practices. The program’s objectives include:

Modise underscored that Botswana’s political history shows that women in Parliament were the reason for stronger laws on marital rights, gender-based violence and ensuring fair labor laws for all.  Women in government have been key to the development of Botswana’s trade policy, its legal code, its foreign policy, its social policy, and the development of the business sector.  Without women at the forefront and behind the scenes, political parties would not be able to organize and run campaigns.  Women are already integral to politics in Botswana.  “But they don’t sit in the seats in Parliament or in the district councils” Modise noted.

Gender equality, particularly in decision-making institutions like governments, is a cornerstone of President Biden’s foreign policy.  The United States is committed to advancing the rights of women and girls both in the U.S. and worldwide.  The Capacity Enhancement for the Political Advancement of Women (CEPAW) Project is a microcosm of that larger global commitment.  Minister Mokgethi said the project comes at the right time as Botswana is one of the countries in Southern Africa that has a low percentage of women in high level political positions.

For additional information, please contact the U.S. Embassy Press Office at 373-2419 or PASGaborone@state.gov.