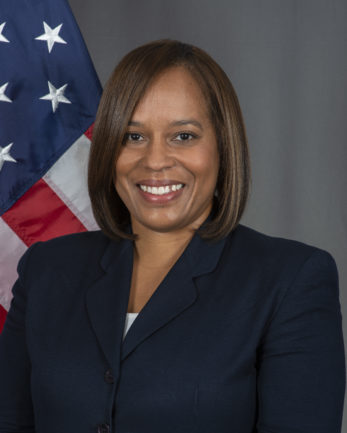 Kali Jones is a career member of the Foreign Service and has served in a variety of distinguished positions that have spanned the globe. Before her assignment to the U.S. Embassy Gaborone in July 2018, Ms. Jones was the Diplomat in Residence at Tulane University.  Ms. Jones has served in Ho Chi Minh City, Port-au-Prince, and Brasilia.

In Washington, Ms. Jones worked in the Department of State’s Operations Center as a Watch Officer under former Secretaries Rice and Clinton, was Chief of Staff to the Counselor of the Department, and Deputy Director of the Advance Division in the Executive Secretariat.

Before joining the Department, Ms. Jones was the associate director for programs of the Ralph J. Bunche International Affairs Center, as well as a lecturer of constitutional law at Howard University. Prior to this role, she was a law clerk for Louisiana Supreme Court Chief Justice, Bernadette Johnson. She also served as a Peace Corps volunteer in Madagascar, where she established a health program.

Ms. Jones is a graduate of Howard University and holds a JD/MSPH from Tulane Law School and the School of Public Health and Tropical Medicine.