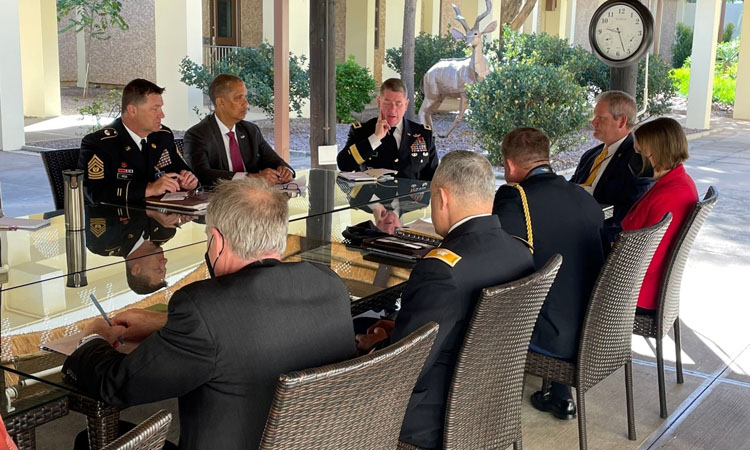 The U.S. Embassy in Botswana was honoured to host Major General M. Todd Hunt, the Adjutant General, North Carolina National Guard, April 26-28 in Gaborone. The Botswana Defence Force (BDF) and the North Carolina National Guard have been state partners nearly 14 years, conducting numerous Army and Air Force engagements in Botswana and in North Carolina over that time. The purpose of the visit was for Major General Hunt and North Carolina’s Secretary of the Department of Public Safety, Eddie Buffaloe, to conduct key leader engagements with the U.S. Embassy, BDF, and key stakeholders within the government of Botswana regarding the bilateral relationship between North Carolina and Botswana.  The visit focused on engagement possibilities to bolster the civilian-to-civilian cooperation relationship and to expand the current military-to-military relationship.

Major General Hunt was accompanied on his trip to Botswana by North Carolina’s Secretary of the Department of Public Safety, Eddie Buffaloe, and Command Sergeant Major Brian Webb. The delegation met with representatives from the Ministry of Defence and Security, Ministry of Education, the BDF Staff College, and the National Emergency Operation Center. The team was honoured to attend the Parade of Medals Ceremony at BDF Headquarters at Sir Seretse Khama Barracks.

Major General Hunt’s visit further strengthened the ties between the North Carolina National Guard and the BDF. The visit also advanced the initiative to reenergize the partnership with the government of Botswana for the purpose of collaborating on mutual national security priorities, including education and disaster response.